Elizabeth Bahe, Executive Director
​Elizabeth "Liz" Bahe originates from Só’silá (Star Mountain), in northern Arizona.  She is an enrolled member of the Navajo Nation with paternal lineage from Lac du Flambeau Band of Chippewa.  Also acknowledged in her maternal line of people are Hopi and Tewa from the Taala Hoghan and Star Mountain areas.

Liz has been an administrator and educator within colleges and universities for 20 years, supporting diverse student populations along their access path to college. She most recently returned to Northern New Mexico having been the Director of the Diversity Collaborative at Fort Lewis College prior.  Her academic background reflects a BA in Political Science with a minor in Navajo Language and an MEd in Counseling from Northern Arizona University.  She also attended Colorado State University for a PhD program in Higher Education Leadership and Human Resource Studies.  A former school board member for Santa Clara Day School when her children were attending, Liz is excited to return to serve as the school leader for KCS.

Larissa Aguilar,  Kindergarten/ Tewa Language Instructor
Larissa is the Kindergarten/Lead Tewa Teacher at Kha’p'o Community school.  She is from San Ildefonso/Santa Clara Pueblo. She is a mother of two, a son and daughter. She enjoys working on pottery, sewing, and also likes the outdoors and hunting. She holds an Associates in Applied Science in Industrial Design and Drafting from Northern New Mexico College , and an Associates of Arts in Library Science from Dona Ana Community College in Las Cruces. She graduated from Northern New Mexico College this past Spring 2020, where she is obtained her Bachelor's Degree in Elementary Education. She has worked for the Santa Clara Pueblo Community Library for over 7 years as an Information Technology Technician. She chose to work for KCS because she loves working with kids and enjoys seeing their eyes light up when they have learned something new. She is excited to work with the children to help teach the Tewa language.

Jessica Levis, First Grade Teacher
Jessica Levis was born and raised in Maine and moved to New Mexico in 1999. In 2000, she received her Bachelor of Arts degree through Long Island University's Global Program. In 2000, she was hired for her first teaching position at Ohkay Owingeh Community School. After spending three years at OOCS, she became employed as a first and second grade teacher with the Santa Fe Public Schools. In 2007, she earned a Master's degree in Anthropology from New Mexico Highlands University. She is a Level III certified teacher with a license endorsement in Reading and she holds a National Board Certification in Literacy. She lives in Santa Fe with her husband and three children.

Diane Katzenmeyer-Delgado, Second Grade Teacher
Diane Katzenmeyer-Delgado has been in education for 27 years in northern New Mexico and is excited to return to the classroom after 13 years in school administration as a principal and Assistant Superintendent. She earned a BFA in Photography from the Rhode Island School of Design and came to New Mexico after graduation in 1988. She then pursued education earning a BA from the College of Santa Fe and an MA in Educational Leadership from New Mexico Highlands University. She holds Level III education licenses in Early Childhood, K-8 ,7-12 and Administration with endorsements in TESOL, Bilingual and Visual Arts. She has experience as a bilingual elementary teacher and secondary level visual arts teacher and has worked with the Pecos, Santa Fe, Los Alamos and Pojoaque School Districts. She lives in Jacona with her husband and two teenage children and enjoys reading and beadwork in her spare time.

Ms. Delgado believes in collaborative hands on learning and is looking forward to engaging parents and community members in student learning.

Diane Chavarria, 3rd/4th grade Teacher
“Learning is a never-ending and exciting adventure” is the motto that paves the way of Diane's life. She is a proud wife and mother of four boys who are from the Santa Clara Pueblo. With a Bachelor of Arts in Anthropology from the Pennsylvania State University, she pursued a background in outdoor education for four years at Mesa Verde National Park, where her respect and appreciation of the Native American cultures originated. Then, she achieved a Master’s in Education in Curriculum and Instruction from the New Mexico Highlands University. Currently, Diane is a Level Three certified K-8 teacher and a National Board Certified Teacher (NBCT). In addition, she earned her Master’s in Educational Leadership with an administrative license through Adams State University. She is excited and grateful to continue teaching at Kha’p’o Community School. 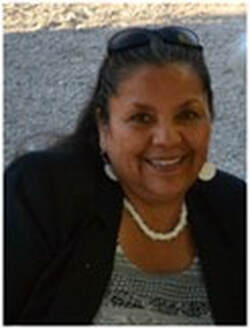 Phyllis Jenkins, 5th grade Teacher
Phyllis is Dine’ and was born in Tuba City, Arizona.  She is married with two daughters and four grandchildren, and has lived in Santa Clara Pueblo for 20 years. She taught at Santa Clara Day School from 1997 – 2016, and is excited to return to Kha’p’o Community School. She looks forward to embracing new adventures with her third grad students and incorporating community and language at every opportunity. 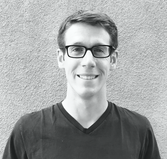 ​Paul LeFrancois, Sixth Grade Teacher​
Paul LeFrancois is from southern New Hampshire and has worked in education in New Mexico for the past 7 years. After teaching at Navajo Elementary School in the northwest corner of the state, completing a Master’s Degree in Elementary Education at the University of New Mexico, and mentoring teachers with Teach For America, Paul looks forward to working directly with students at Kha’p’o Community School. Because he believes that quality education must have community at the center, Paul is driven to ensure that schools and classrooms work in close partnership with families and community. Having just moved to Santa Fe with his wife Lauren, Paul is excited to learn more about and to become a part of the northern communities of New Mexico.

Steve Marsh, Guidance Counselor
Steve Marsh has been counseling children and families for 25 years.  For nine years he worked in residential and community based settings serving Northern New Mexico and the Eight Northern Pueblos. Steve has been the School Counselor at Santa Clara Pueblo for more than 15 years.  He especially likes working in the Pueblo school setting as it provides the opportunity to develop long term and meaningful relationships in support of student’s social, emotional and academic growth.
Steve strongly believes that each person, young or old, possesses their own answers to their life challenges and he tries to support their inner wisdom in resolving those challenges.  He often refers to counseling with children as “teaching to the heart.”

Linda Martinez, Special Education Technician
Linda Martinez is from San Ildefonso Pueblo. She is married to her wonderful husband Dale.  Linda received her Associate Degree in Art from the Institute of American Indian Arts in Santa Fe. She has worked in the school system for 25 plus years.  Linda has held positions such as  Resource Room Librarian, Substitute teacher, Secretary, After School Tutor, and Cook. While she was working full-time in her different roles, Linda worked on her own personal goals and attended classes to obtain her degree.
Linda started working at Santa Clara Day School 15 years ago in Special Education Department.  This is a classroom that is set up for children to be successful an encouraged to challenge themselves at their rate of learning. As she worked with the children she was also encouraged to go back to school and receive her Bachelors Degree in Elementary Education from the College of Santa Fe.

​Eliza Naranjo Morse, Cultural Arts Instructor
Eliza Naranjo Morse is the Art teacher at Kha'p'o Community School.  To navigate life with a creative and confident sense of renewal, resourcefulness and relationship are the skills she aims to share with the young people attending KCS. Her most valuable form of education has been the ongoing relationship she has with her elders and and land around her. Her professional experience includes an Art Degree from Skidmore College (NY, 2003). She has been working as an artist for more than 15 years and her work in creative consultation and programming within Indigenous Institutions.

Robert Abeyta, Cook
Robert Abeyta is an enrolled member of Santa Clara Pueblo. He has worked with youth for over 20 years as a Recreation Assistant, PE teacher, After-school Program Coordinator, coach and Friend.  Mr. Abeyta enjoys working with youth and see them develop into young men and women. 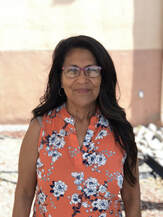 Marie John, Wellness Coordinator
Marie is the Wellness Coordinator at Kha’p’o’ Community School-overseeing the 21st Century Program and School Health Office.  Her experience includes working in the medical field for 17 years as a Medical Assistant.  Marie has worked in a variety of health care settings- such as urgent care, family practice, OB/GYN and specialty clinics.
Marie’s parents are Marcia & Andy Padilla from Santa Clara Pueblo and her father David John, Sr. is from Hunters Point, Arizona.  She was raised in Santa Clara Pueblo. She is an enrolled member of Santa Clara Pueblo and is half Dine’. She has four children-Daniel is married to his lovely wife Melodie and they have two beautiful daughters; Jamie lives and works in Albuquerque; her sons Stanlee and Jakobe are both in high school at Los Alamos High School.
Marie most enjoys caring for the Kha'p'o Community School students, enhancing school health, planning meaningful programs, and seeing students’ smiling faces every day.

Leonard Gonzales, Maintenance/Bus Driver
​Leonard Gonzales was born and raised in Rinconada, New Mexico. He has lived there all his life. He likes to go hunting for big game like bear and lion. He has been a plumber for 27 years.  He is a proud father of 2 children and grandfather.  He has decided to make a change in his career to work with the kids and be a bus driver. He enjoys working with all the children and is thankful for having this opportunity to work here in Santa Clara Pueblo.

Mina Harvier, Parent Educator FACE Program
Mina Harvier is the daughter of Andy and Marcia Padilla from Santa Clara Pueblo. She has two beautiful children, Mirdacia and JaiP'o, with her husband Jordan. She has worked at Santa Clara Day School for 9 years and San Ildefonso Day School for 4 years. She is currently a member of the Santa Fe Opera Pueblo Advisory Board, she also enjoys traveling, camping and attending concerts. She looks forward to this great opportunity and blessing to be back home at Kha’p’o Community School.

Rose Naranjo, Adult Educator FACE Program
Rose Naranjo is from San Ildefonso Pueblo. She graduated from Eastern New Mexico University with a Bachelors of Science in Elementary Education. She taught at the Santa Clara Day School for 27 years and is the Adult Educator for the FACE program.

Antoinette Herrera, FACE Coordinator/ Co-Teacher FACE Program
​Antoinette is from Santa Clara Pueblo. She goes by the name Toni, she has a family of 4, herself, husband, and two children. She has a degree in Applied Science and she is planning to go back to college. By coming to the KCS, it is clear that she wants give back and pass on her knowledge to the younger generations and in return, they will teach her something. We learn and work together; that’s what community is.
Contact